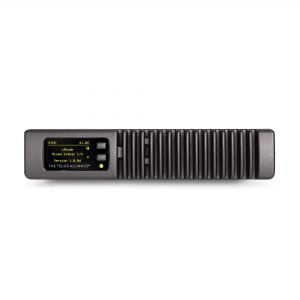 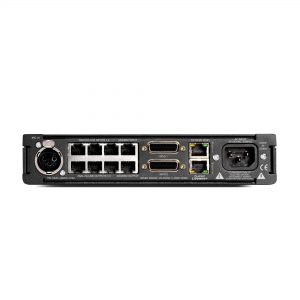 Compact 9.5″ x 11″ second-generation AoIP interface with 6 GPIO ports for control of peripheral devices. Each port is equipped with 5 opto-isolated inputs and 5 outputs, presented on standard DB-15 connections, which can be associated with audio sources and/or destinations to provide machine start/stop pulses, lamp drives, and remote channel controls. Once a port is configured to be associated with a particular device, it automatically activates with that device. Noiseless and fan-free; can be conveniently placed adjacent to your audio devices, rack-mounted, or wall-mounted. Dual Ethernet ports allow connection to fully-redundant networks. Redundant power plan auto-switches from internal supply (on models so equipped) to PoE backup power when needed. Can also draw primary power directly over Ethernet from switches compatible with the IEEE 802.1af PoE standard (such as Axia xSwitch, p/n 2001-00357-000); perfect for single-cable deployment in tight locations. Requires one unused 100Base-T Ethernet port for connection to an Axia network. Auto-sensing power supply, 90VAC to 240VAC, 50 Hz to 60 Hz. 7 Watts. Occupies 1RU when rack-mounted. Rack-mounting kit included with each xNode.